Introduction:  The following is a message written by American Kabuki with his recent communication with Cobra who said he visited Agartha which is located inside the Earths interior.  This confirms even more that the Earth is indeed hollow! 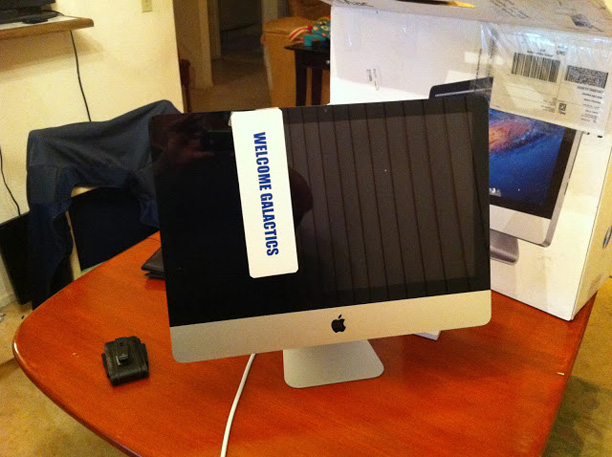 After my iMac was ordered, a reader offered me an iMac that he had inherited from a friend.  Its the smaller screen model, but same year of manufacture.    I told him that I knew of a light worker that really needed a new computer and I would set it up for them if he shipped it to me to inspect, configure and forward to the person in need.   Thought I'd share the love that was shown to me to someone else.
When I unpackaged the box tonight I found this bumper sticker attached to the screen.... "WELCOME GALACTICS".....  My readers keeps me entertained and laughing!

I am a little behind in posting to the blog.  I've been a busy last 3 days.  Not even Brian or Sophia is getting any email from me very rapidly.  My apologies guys!  Honestly I haven't forgotten about you!

I did a partial interview with Cobra Thursday prior to the conference in Laguna Beach.  I visited the Laguna Beach vortex, and met Lady Cobra as well!  Yes folks! The Cobra's come in pairs!   I was very impressed with both Cobra and Lady Cobra, simply delightful people to meet in person.   Its been a long time since I have seen a couple this close and happy as these two are.  And I really like their energy and nature. Very gracious and charming people.  I even took them grocery shopping!

My interview got cut short by time considerations and a bongo player in the room next door (we don't know who that was)  so I will be going up again next week for a continuation of the interview and possibly a short review of what transpired at the conference after I was gone.

I learned many things I didn't know, which I will be writing up as my time frees up.  One thing is quite clear to me is that he is good and decent man.  I think Cobra has been wrongly maligned.   He's speaks 5 or 6 languages, one of which is Pleiadian.   Lady Cobra is a very interesting person as well, with some special gifts of her own.  I am hoping to do an interview with her, but whether we do that has yet to be determined based on what the folks upstairs think is best.  Nobody has interviewed Lady Cobra yet that I know.   What a lovely human being and soul she is!   She's a perfect counterpart to Cobra.

We covered some interesting topics in the first half hour of the interview but the conference was about to start and I had a Thanksgiving dinner to attend with the family back in San Diego.    I'll give you a teaser or two, we discussed recent Israeli violence, the star gate on the Temple mount/Dome of the Rock mosque, and how the Ascension of Mohammed happened on that spot....something I've never heard anyone else discuss.  Yes Mohammed is one of the Ascended Masters, along with Jesus, Buddha and St Germaine...among others.  And Cobra says he has been to Argatha... and I think he's telling me the truth!
Posted by         AMERICAN KABUKI at 9:25 AM
Posted by Manuel Pineda at 1:29:00 PM