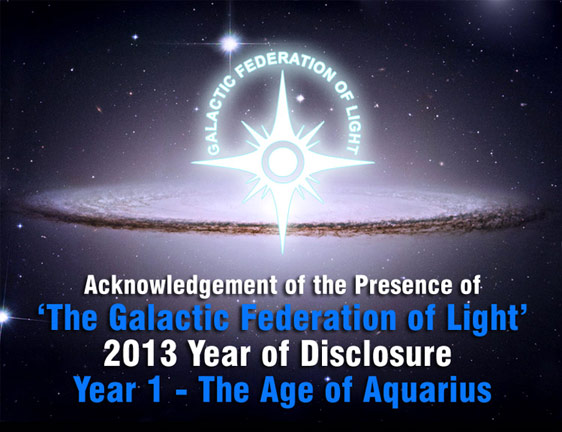 This is the year that we will definitely see disclosure.  The Galactic Federation is getting ready for disclosure and will eventually decloak.  Based on the message given by Zorra from Hollow Earth he mentioned that some of the spacecrafts of the Galactic Federation have already landed on Earth but right now they are still cloaked.  They are now in China, Paris France, Russia, LA California, New York and Washington DC.  He said in New York a lady who was jogging in a park and didnt know that there was an invisible field in her path and she bumped into the side of this spacecraft and fell; since she could not see anything it perplexes her as though there was a invisible wall infront of her.  Similar story in Washington DC as the helicopter of the President was to land on one of the grounds near the White House, they found out that they could not land and appeared as though they are just hovering in mid air as though they are sitting on top of an invisible force field.  They didn't know that there was a cloaked spacecraft which is already on the ground.   This goes on to show that the GFL is already here in our world and just awaiting a go signal before they will visibly appear before the world community.

Possible Checklist they are looking for before they will appear in the public:

1.) Changes to the World Governments, particularly in Europe.
2.) Introduction of the New Financial Systems.
3.) A Go signal from Creator God to go ahead.

Message of the Galactic Federation of Light through Sheldan Nidle

7 Eb, 0 Yax, 9 Eb
Dratzo! We return! Your world is still caught in an in-between reality-state as Heaven prepares to signal the much-awaited green light. We are setting up special liaison teams to monitor what is shortly to happen. The coming announcements by your new governance will mark the end of a long era of dark control, during which wars, economic upheavals, and other widespread forms of discord characterized the ups and downs of numerous regimes over the course of this old form of governance. It is to be replaced by an interim administration which will prepare the way for a duly elected one and set up new rules and by-laws regarding the general operating standards of the first of your new de jure governments. Contained within the new rules are the new financial and monetary systems based on hard currency, open rules of banking, and an end to large multiservice banking conglomerates. Furthermore, the way will be opened up to get a formal disclosure announced, and the many provisions of NESARA introduced and applied. This will establish a new relationship between individuals and their national governance.

The new banking system will end the long period of debt slavery. In its place will be a system that honors your essential freedom and sovereignty. This requires fail-safe laws designed to protect your sovereignty, end one-sided political parties, and sponsor the rise of an educated and responsible electorate. Each member of this electorate is an individual who needs to learn to express their views based on extensive study of the issues in the world around them. Governments, until now, have both bamboozled the electorate and used carefully slanted rhetoric designed to camouflage the activities they were actually engaged in. In effect, truth was to be kept from the public by any means possible. Now, you are to witness an about-face in administrative operating procedures. Your new governance is to be built upon trust, and upon the premise that elected officials are kept under careful scrutiny on the part of the public. Your most powerful tool will be the intrinsic transparency built into the new rules, and this demands your involvement as both watchdog and advisor. It is a wholly new relationship in responsibility, one which marks the start of your exciting jaunt to galactic society.

One of the more vital responsibilities of this new governance is disclosure. This single act opens up the lines of communication to Agartha, your Ascended Masters, and of course us. With this announcement your world opens up! And those who have long watched over you can now openly come forward. As you can imagine, we eagerly look forward to this special moment. At long last we can explain to you what first contact is all about, and introduce our blessed cohorts on this journey to full consciousness. None of you has any notion of your true inner potential. Indeed, each of you is burdened by inhibiting beliefs ingrained in you since childhood onwards. Our mentors look forward to helping you move beyond these limited conceptions of reality and learn who you really are. Once these basics are sorted out, you are to broaden your learning to include the truth about your recent history, and here you may find things that anger you. However, it is important to remember that you are never alone, and that measures are to be taken to correct the situations and events that are the cause of your distress.

The coming time is one of prosperity, joy, and harmonious cooperation. Peace will replace war, and general disarmament will end the worry over mass violence. As your consciousness grows, you will experience a need for true community and to re-establish honorable interaction between people and government. This requires an exchange based on the perceived integrity of each party. Your world's currently accepted exercise of power needs to be universally upgraded. Division will be replaced by union; contention by cooperation; and prejudice by acceptance. Such ideals have been so often championed in the past, and now they are to be realized and practiced by all. One of our tasks is to help this along with the introduction of technologies that can take your communications systems to the next, more secure level. As you open up your awareness and begin to feel more secure in your life, you will be inclined to explore new ways of thinking and being which are more aligned with the new levels of consciousness flooding your societies.

Namaste! We are your Ascended Masters! Right now we are watching our associates waiting eagerly for Heaven to sound the sacred horn and begin the new era for humanity. The dark, despite its myriad schemes to derail things, has been unable to prevent the Earth's sacred societies from completing their assigned tasks. New governance, likewise, is in place, ready to take over when these hallowed notes are sounded. We bless Heaven for moving everyone to the point where they are raising their awareness of how close the new epoch truly is. We are ready to hear the many different announcements that are to set our sacred undertaking in motion. Our part in this blessed mission is to guide you to those divine truths which were supposedly 'lost' over the millennia. Those teachings are to be the harbingers of others which will illumine your path to full consciousness.

The new governance is to proclaim your liberation from the many forms of illegal slavery imposed on you by the minions of the dark cabal. Enslavement and disempowerment of the populace was a major component of debt economics, which created a small, ultra-wealthy class that depended for its existence on the complete acquiescence of you all. These denizens of the dark wielded quite a power, but it is as nothing compared to that of Heaven and its great Light! The present Light manifestation is to transform your reality and forge a new, divine one. Heaven set up a specific time, based on the movements of physicality and the divine precession of this solar system. This sacred point is quite near and very shortly a great moment is to happen! Then this glorious living sphere will witness a grand miracle and Heaven's sacred Light will dance across her and transform all!

This divine radiance will confer a new epoch upon humanity. You will become reacquainted with the lovely realms of your Agarthan and space families. The great lineages of Heaven are to appear and proclaim their great truths to all. And this will be only the beginning! You will have so much to learn from us and from your space family. Many truths will be taught about your origins and the nature of your sacred service to Heaven. Ponder on these new realities, feel their resonance within you, and allow them to inspire you as you prepare for your return to full consciousness. In effect, you are to re-earn your angelic wings. As physical Angels, you will take up a whole host of new responsibilities, and it will be our task to teach and mentor you in many things which will form the foundation of your divine service. Our duty is to be your loving supervisors as we prepare you for what lies ahead.

Today we gave you another message to help you further your understanding of what is being done to extract you from the dark realms and return you to the Light. The Creator rejoices in what is happening and the sacred decrees of AEON are ready to transform your reality forever! Know, dear Ones, that the countless Supply and never-ending Prosperity of Heaven are indeed Yours! So Be It! Selamat Gajun! Selamat Ja! (Sirian for Be One! and Be in Joy!)