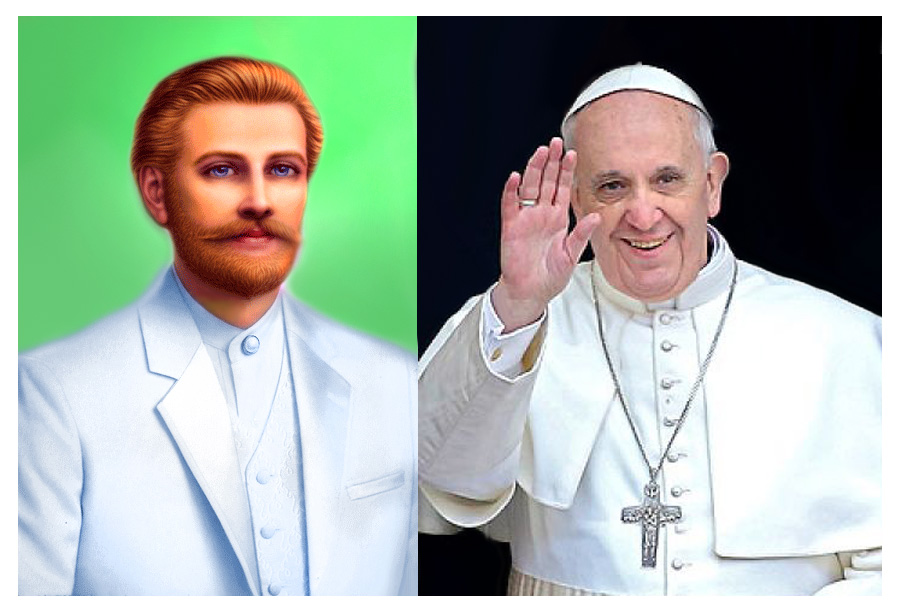 It's already official that St. Germain is back! And this time he decided to walk - in to the person of St. Francis the Pope in the Vatican. Which means the Pope is indeed St. Germain. And I think St. Germain will revolutionize the Catholic world from stagnation into that of genuine concern to the poor of the world. He will definitely outshine Santa Claus from giving away gifts to humanity. If Santa Claus gave away gifts to children then St. Germain in the person of St. Francis will be extremely generous that will bring joy and happiness and put smile into countless peoples faces.   He will give gifts to the masses even if it is not the Christmas season but instead its because it is the season of the New Age of Aquarius.  I can already foresee in the future, a lot of Catholic will shed tears of joy as they receive the gifts coming from St. Francis.  And thus people will return the favor and will be generous to everyone around them.  They will exchange gifts to one another as though Christmas have become a whole year round of celebration.  And because of this the masses of people will become very attentive to everything he has to say.  As he have a lot of message to say and teach as well as some beings he needed to introduce to the world.  He may also correct the many errors found in the bible and put people at peace with God.  All of these gifts are made possible by the work of St. Germain that he did in the past, way back hundreds of years ago.  As they from the higher dimensions detected what the Dark Ones will do and so they prepare in advance.

The Vatican for thousand and thousands of years is home for various foul spirits and from beings who were members of the other team which is the Dark Forces. In addition to that, it was also a habitation for the Reptillians who were the remaining descendant of the Annunakis. The Annunakis started in the Middle East area particularly in Iraq. They were instrumental in the setting up of various World Super Powers beginning from Babylon and then shifted to Persia, then Greece and finally with Rome. Their descendants are scattered around the world and mainly occupy most top positions in governments and big corporations or companies. The style of those who are in the top positions of the Dark Forces is to create a deception to make people believe something that is not true and to pretend they were something they are really not.

The rumour that the Vatican contains vast ancient library could be true. As many people throughout the centuries and milleniums had expressed that they saw some books in the Vatican library that are books that have been suppressed to the public. One example is the man named Mahan. According to him he went to the Vatican sometime in the 1800's and they got a copy of the letters of Pilate which Pilate sent to the Roman Emperor to report what was happening in Palestine at the time especially the news surrounding the life of Jesus and his students. Others have speculated that the Vatican also have copies of the "Unedited Version of the New Testament" meaning a first century manuscript written by Christians at the time. Because the bible that people have today  is a copy from the 3rd and 4th century.   Not having the original could mean that the present copy of the bible have gone through various magical abracadabra editing. They said they dont want to release these copies because if they do so then people will realize that they were lied to as the bible contains lots of added words as well as deleted words and sentences. One of the many things that needs correction is that Jesus actually taught people about the Ascension and the Reincarnation.  These subjects were removed from the original compilation of books that became the New Testament Bible. This discrepancy in the bible is the main reason why there are so many interpretations of the bible and people could not agree on many issues about the exact meaning which is why theres so many denominations and various churches having their own versions of interpretations. But that problem can be solve if only the original copy of the New Testament bible written in first century AD will surface and came out of the well guarded closet of the Vatican.

Now, this is where St. Germain aka St. Francis will come in. He can intervene and let the public get a glimpse of the Vatican library once and for all. Allow people to see the collection of books and be able to read them or study them and interpret them if they are in Latin form. He can also shed some light on morality and correct some of the beliefs of the Catholic faith that is either not based on truth. Many of the priest inside the Vatican either Italian or from elsewhere had expressed that they actually saw Reptillian people walking around the Vatican. Those who have seen them are so shocked and terrified. They thought that the Devil is present in the Vatican. I actually thought before that maybe the Vatican is the hiding place of Batman and Robin (just kidding).

With St. Germain in the Vatican he can definitely do a lot of changes to the Catholic church. He can slowly nudge them into observing genuine concern for other people by showing examples of his own life. He can also deliver and teach them about the existence of other life on other planets. The Vatican for many years have access to land based space observatory one of which is on a mountain in the US. And so, the future is really bright; filled with very positive possibilities. And last and not least, I am sure St. Francis which is now occupied by St. Germain will usher and help to lead the world in transitioning into the New Age, an age which is very much different from the previous one. As the Light take the center stage, while the darkness will take the backstage as a shadow creating and forming a distance between the two opposite spectrum. The Light will shine and will prevail.