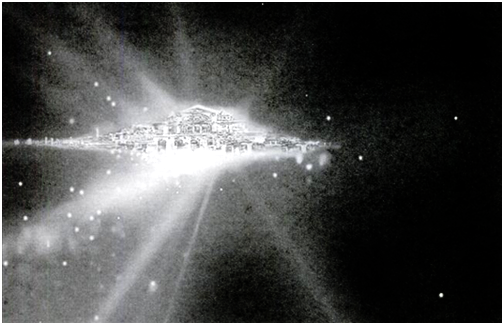 I just received a message of confirmation that this photograph is indeed a picture of the New Jerusalem mothership taken by the Hubble Space Telescope.  The dimension of this floating city/land in space is about 2000 miles in length and 1000 miles in width.  And remember this is only one of the many mothership which are present in our solar system. This is about almost the same size as Australia if we put it on top of the Australian skies.  This means geographically it can be seen from coast to coast, from one end of Australia to the other end of it.   And the same is true if this was to hover above either the USA or Canada.  It can block sun light during day time as well as moon light during night time; but this is only for those within the shadow of the ship.  But this city called New Jerusalem is so huge and so bright and it can provide light for the time being when it is moving and hovering a particular area of the world.

Now, the next question is when?  When will this mothership shall descend and appear on Earths sky/atmosphere?  Well, as far as go signal is concern its already been given.  Which means either sometime next month or the coming months.  But it's definitely this year!  There's no doubt about it.

A mothership with this scale and magnitude cannot be contained.  There's no amount of cover up from the main stream mass media can silence the news about the impending arrival as well as the appearance in the sky of the New Jerusalem.  Absolutely nobody on Earth will miss the spectacle! Everyone with their cameras will take photographs of the New Jerusalem whether their using their own phones with built in cameras or high quality DSLR cameras.

What about potential resistance from the ground?  Today, there's no nuclear missile on Earth that can pose some threat to the New Jerusalem as they are all had been rendered inert or deactivated.  Even smaller weapons on Earth such as lasers can be deactivated as they can jam it electronically.  They can also prevent any electricity from flowing from those devices which can make it unable to function.  And they also have a force field shield.  They can also prevent any bullet from being fired from a gun or machine gun.  But rest assured they are not here for invasion. In fact they are the long lost family members of the human race on Earth.

One of the most important thing when the New Jerusalem arrives in the sky is that they will begin a series of "BROADCAST".  And they will begin to educate us about the origin of each and everyone on the planet as well as the true history of the world.  If you recall what happened in the late 70's when the British news television was override by the spaceship of Vrillion of the Ashtar Command.  They were able to super impose their voice on top of the actual broadcast of the TV news network.  This time the New Jerusalem are equipped with a capability that they can completely stop any current broadcast by any television network on Earth.  And they can even open the television when its close and unplugged, as they have the technology to broadcast and distribute wirelessly electrical connections allover the planet.  And so, I tell you the coming of the New Jerusalem is simply "Unstoppable!"

"In My Father’s house are many dwelling places; if it were not so, I would have told you; for I go to prepare a place for you." John 14:2 (NASB)