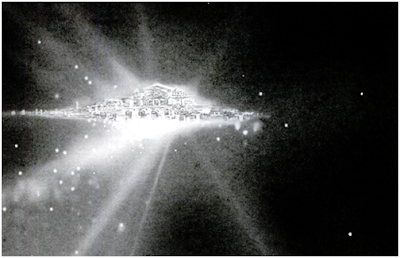 This is it!  The New Jerusalem Mothership is slowly approaching Earth and is getting closer and closer everyday.  It already departed from its usual location which is infront of planet Venus.  And now it's time for it to grace the planet Earth to be within the vicinity of our worlds sky and atmosphere.   As of now, it is located in the Northeastern quadrant of the sky.

This will fulfill what was said in the bible in the book of Revelations as well as the prophecy of Jesus Sananda when he said in effect, "I tell you, you shall see me coming in the clouds of Heaven, and me sitting on the right hand of the Father".   Jesus was clearly talking about the descend of this mothership while on board the ship.

When its already very close to Earth, a lot of us people will no longer be able to deny the existence of beings from outside our world.  We will realize that we were not alone in the Universe from the very beginning.  This will be the subject of news around the world as it will be featured on newspapers headlines, TV and internet.  No one will be able to say that it is not real as everyone who have high definition cameras can take photograph of the New Jerusalem and see the glory of the City of God in all its splendor and majesty!


As you look at it, you will see it like a ball of light that has a halo encircling around it.  This means they turned on the force field for the entire mothership.  And I am sure as it gets nearer and nearer the world leaders even President Obama and the Pope will express welcoming remarks for the arrival of the New Jerusalem. And I look forward into what Obama will say including what other world leaders even the Pope will say when we finally see the New Jerusalem in our own sky and atmosphere.

From what I heard advance technological equipment were already installed on Earth several months ago that will allow the New Jerusalem to broadcast around the world simultaneously.   Once they appear in our atmosphere they will start a series of broadcast worldwide informing us about our future.

And one of the most important thing about this is that it means the return of Jesus Sananda along with brother Ashtar and the many peoples from various star systems on board the New Jerusalem is near.  And that they will finally announce to us the conclusion of our embodiment into this world.