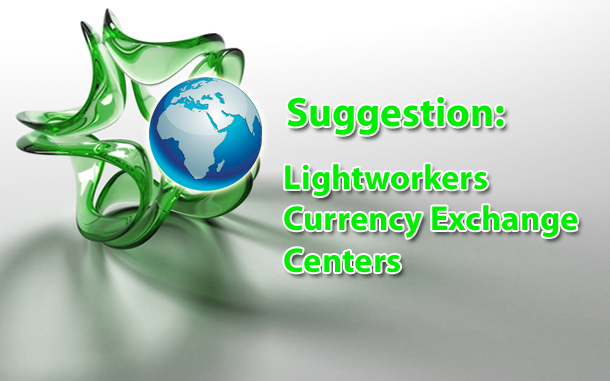 This is just an idea, a suggestion that might further speed-up the Global Currency Reset.  Since we know that the Revaluation had already taken place and that there are just some groups who are determined to delay the release of this to the public, then why don't we setup a temporary exchange centers around the world operated by Lightworkers globally?

All it takes to get this started is to just open "ONE" account for a Foundation or a small temporary Credit Union that will be overseen by Kathryn May, Anne DeHart, Billie Woodard and all the others that can be trusted by Father God and the Company of Heavenly Beings.  This Credit Union will be allowed to exchange at a New Market Rate as well as the Contract Rate. And based on this, the Credit Union will then issue accreditation to Lightworkers (that can be trusted) around the world acting as agents to do the exchange in their own local area.

This will avoid the use of banks as they are unwilling to do the exchange as ordered by their superiors.  This means, the Credit Union which  can be based in the States; will then issue cheques to the Lightworkers who are accredited agents to do the exchange and be able to encash these cheques at their own local banks.  And so a Lightworker which is situated anywhere in the world can then accept currency exchange at the official Market and Contract Rate for the people in his own locality who have foreign currencies they needed to exchange for higher rates.  In addition to the use of cheques, the Credit Union can also send it to the exchange agents via wire transfer to the agents banks and vice versa.

The Lightworker Agents will then coordinate with the Main Credit Union and will be the ones to either send via secured/registered mail or private courier, and deposit to the Credit Unions account the currencies they received from people who made the currency exchange with them in their local area.

And when this happen the Big Banks and the Governments of the world will be forced to play and dance to the tune of the New Golden Age of giving and sharing and not ignore anymore the Global Currency Reset and allow it to go ahead for the public at large, because they will not want to be left out as they want everything to be under their control.
Posted by Manuel Pineda at 12:57:00 AM