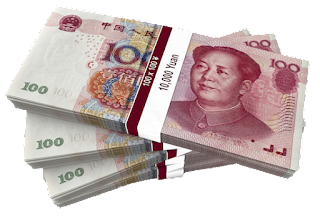 The IMF recently announced that the Chinese Currency the Yuan/RMB will be included to the basket of SDRs (Special Drawing Right) currencies.  This definitely shows that the Yuan is ascending in the international trade.

China's rise is phenomenal, considering in the 70s and early 80s China was not yet very active as a manufacturing hub.  However, when market economy was introduced, the industrial and economic activity of China seems like being driven by a very fast F1 racing car.  They were running so fast that they were able to overtake Japan as the world's second largest economy back in 2010.  Today, China has surpassed the US as the world's largest economy.

The way the Chinese manage businesses and their finances is really amazing.  Their determination to achieve success through hard work and discipline is unparalleled. The only problem now is: with the advent of their fast paced industrial activity comes with an unwanted effects of too much pollution in the form of smog.