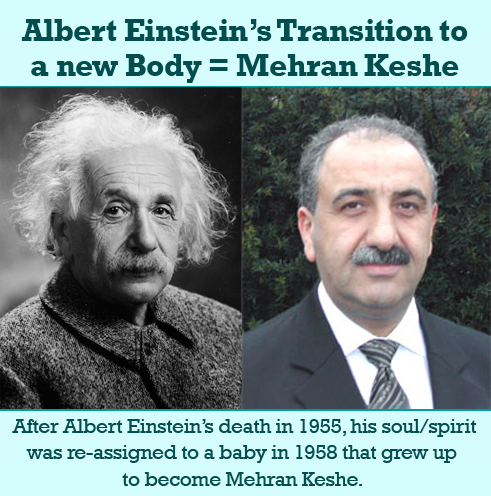 The Subject of Reincarnation

"Earth is unique in the sense that the rate and frequency of the renewal of bodies transitioning into a new body (also known as reincarnation) is very frequent and regular as the average lifetime of people on the surface world is only more or less 100 years. Unlike those in Hollow Earth, the average lifespan of their physical bodies is hundreds of thousands of years, as the cells can be reinvigorated for a prolonged existence".

Unknown to most people that since Albert Einstein passed away in 1955 three years after that, his soul was re-assigned for a new reincarnation on Earth to a baby that will become known as Mehran Keshe who was born in 1958.

The only problem as to every incarnation, which is generally true for everyone  is that you cannot bring with you your previous memory of the past or that of your previous lifetime.  As Einstein switched to a new body having the same soul and spirit but with a new physical body; he now embarks on a new life of existence and journey of personal experience.

Death therefore is only an Illusion.  And that the physical body dies and decompose but the soul and spirit continues as though nothing happened.  This important transition highlights the fact that the soul is actually "Immortal".

Although, Albert Einstein cannot totally recall and remember the past; but his frame of mind and the way he thinks as well as the quality of his persona can still be retained and it remains intact even after the transition into a newly assigned body of incarnation process.

The thought processes or the way Einstein thinks in the past can be traced literally to the personality of Mehran Keshe.  This is because the soul is the same soul that used to occupy the body that we used to know as Albert Einstein.  It just that now that soul transitions to a new address (so to speak) into the body of Mr. Keshe.

According to Zorra, the person that is now inhabiting the body of the individual known as M. Keshe is the one previously known as Albert Einstein and that there's at least a minimum of 5 years before a soul can be transferred and re-assigned to a new body. And this is a standard waiting procedure applicable to everyone on Earth. This means those who passed away and have left behind their physical bodies will have at least 5 years to wait until they can be given new assignments for a new body.  Usually, the assignment will be given/transferred to newly developed baby inside the body of pregnant women who are about to give birth.  And since Einstein needed to be in a particular timeline then his waiting time has been cut short into 3 years in order for him to be assigned to the new baby that was about to be born into this world.  And that transfer took place in the year 1958.

And so, the person that was named as "Mehran Keshe" was born into this world but the soul persona that is inhabiting and operating that body is no other than the great Albert Einstein himself.

The only problem with the process of incarnation is that no one remembers their past or their former lives.  This is probably one of the very reason why those Pharaohs in Egypt wanted their bodies preserve so that with the use of cell and molecule regeneration technology they can then restore the previous bodies and recover their memory of the past as they re-visits their former and previous physical bodies.

Have you ever met someone and felt that you've known that person for a long time even though you met them a few days ago?  That's what it is, we just can't remember the past and that person could have been one of our close friends or family members in the previous lifetime.

Take Albert Einstein for instance.  Bring to Mehran Keshe the beloved daughter of Einstein - his own sibling in his past lifetime and though the soul inside Keshe (which is previously Einstein) could not remember his own daughter; but the spirit can detect that this person is someone dear to him in the past.  I am sure that if we allow the daughter of Albert Einstein meet Mehran Keshe, she will feel as though she is infront of her dad even though she is now older than Mr. Keshe.