Note: I'm posting this even though it's already late as this was released last Nov. 8, 2016. St. Germain channeled by Susan Leland confirmed what was said by the people of Hollow Earth that the Cabal/NWO have their own spacecrafts.  And they have that for a long time, traveling to and fro in outer space in secrecy.  So, some of the UFO sightings in the world are not all from the Galactic Federation. It also confirmed the channeled message of Blossom Goodchild about the planned false flag alien invasion event. 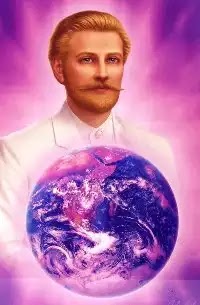 Ashtar On The Road Teleconference -
November 8, 2016


"I am Saint Germain, and I am most honored to be here with you on the eve of tomorrow on your calendars! And the reason that I say this, is that it is an opposite day, which has the ability to energetically negate. Tomorrow is a day of 11-9. And furthermore, it comes in a year of 9 (2016). And what is 11-9 anyway, except the opposite of 9-11 which is still an infamous day - wherein the chains were pulled tighter; wherein the walls were closing in even more, as Ashtar has described;* wherein more and more Freedoms for everyone Worldwide were taken away; wherein more and more innocents were killed deliberately - as a part of a program that was initiated long ago, but it was nevertheless given more energy, or empowerment, as a result of what occurred on that day of 9-11, in a three-year-end (2001) so, it was not complete then.

"Why I am saying this is? What is the aftermath of 9-11 anyway? The legacy of 9-11, is it not fear? Did not 9-11 instill - deliberately, it was done, of course - but did it not instill FEAR Worldwide? Yes! It was a day when the consciousness came together, where it spiked higher in the LoveLight than ever before. But what was the result, the long term result? It was fear! And of course, war and all kinds of creations that instilled more fear - Homeland Security, laws that took away Freedom and the seemingly relentless march of the dark hats and their black ops events.

"And tomorrow is 11-9. And we have mentioned this before to this one speaking and she mentioned it the other day when in conversation with Beloved Fran and our Beloved A&A** news reporters because we were giving this information.

"Take all those 'blah, blah, blahs' and put them at zero point! Take all the lies, the propaganda, the illusions, and the disillusionments andshine the Light on them! Put them in a bag, a box, a red balloon - whatever you wish - and shine the Light on them and recreate from that point of balance, of zero point.Recreate that which is already begun, the Age of Aquarius! Strengthen it, empower it. Recreate it in the visions that you hold dear, that you hold in your Hearts. Put the Light of Truth on all of it and share it with the World. Do not allow yourselves to get clenched up with any kind of fear!!!

"There is nothing to fear unless you want to be afraid. You are not a dark hat, awaiting whatever is going to happen. And if there is a dark hat listening - and sometimes this occurs - be assured that you are loved and you are thanked for what you have shown of your dark side and that we - this Grand Company of Light, this Ashtar On The Road Family and all who join together from all Realms of LoveLight - offer you Love, offer you Peace and Forgiveness, the absence of judgment, and Gratitude - for allowing enough Light to shine on you that the whole World can see what you have been doing!

"And know that no one is afraid of you anymore, because that has been your major empowerment. You are not going to stage a false flag event like 9-11 or some of the earlier events that have occurred, or later events. Your next big false flag event has already been stopped and it will not happen!!! And, of course, the World knows that that was to be the fake alien invasion.

"And, yes, you have some starcraft, but they are no match for the Ashtar Command. So I urge you to stand down. Come forth. Let the Light shine fully upon you, because it will shine upon you completely in the next moment anyway! Release yourselves from the bondage you have created which is so dark, that in its own way it has been more destructive to you than that which you have imposed upon the rest of the World. We understand this and we have Compassion for you and loving Forgiveness, but we also will tell you, this is the Age of Aquarius!!! We've already entered into it. It is the age of Sat Yuga and you, even though you are trying to stop the progress, you are the ones who are being stopped.

"So join with us in the Light of Love - and if you will not, at least know that we offer it to you unconditionally. And now, step aside because the World is coming into the Light of Love, to fully enjoy the Age of Aquarius or what we call the Golden Age. And if you choose not to join us, just know that you will have other opportunities and, meanwhile, that you are thanked. For even though you have viewed your services as being dark and fearful and controlling, WE view them as showing the way by inspiring awakening Humanity to choose the Light instead of the dark!

"So I, Saint Germain, stand here in honoring of you as I welcome all of you of the Light - the Lightworkers, the Beloved Ones of Planet Earth who have chosen the Light, or are in the process of doing so. I welcome you to the Golden Age where only Love exists and where all of your visions, your dreams await you!!! And so it is. Namaste!"