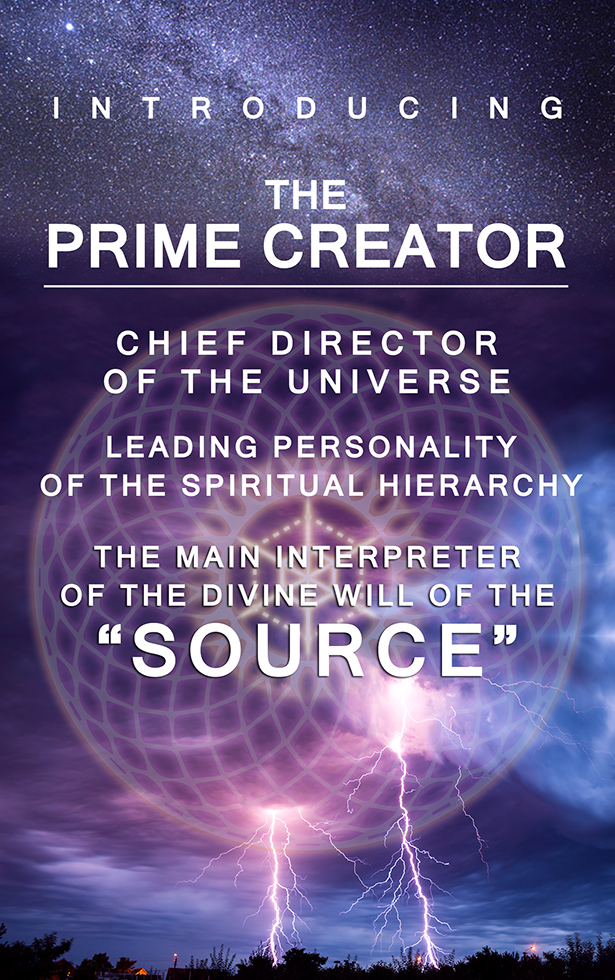 Today I would like to discuss about the The Prime Creator. He was the first person that came forth from the SOURCE. In the bible, He is the ONE referred to as the Ancient of Days. Although he is called the Ancient of Days, He actually looks very young, as He is not bound by the physics of aging like we do. But He can appear in multiple forms in order to interact with the entire created universe. He can temporarily appear as a child, an adult, a young lady, a young man, an old man or woman, an animal (of all kinds). He can also appear in multiple places at the same time. And sometimes he will appear as a black man, or elderly homeless person begging in the streets of the world.

He does this transformation from time to time in order to test and see the soul development progress of every being in this world. The Prime Creator can tell if we are maturing spiritually by the way we react and respond to someone who is extremely poor, ugly and sick. We may not be able to help materially but He knows our responses inside of us as our etheric aura can be read by him to see if we are progressing, maturing towards a more positive spiritual evolution by becoming more caring, compassionate and LOVING. However, The Prime Creator does not do this test to judge anyone. It was just one of the many ways to gauge the spiritual maturity of everyone.

The Prime Creator was the ONE who taught his children to be creators of various Galaxies. One of the earliest Galaxies that was created by his children was the Milky Way Galaxy in which where we reside today. The Prime Creator had various children; but the eldest among them was named Zorra and Saraiya. Today we call them as Mother/Father God. They were the first TWIN children of the Prime Creator. And they are the ones who created the Milky Way Galaxy with some guidance and direction from the Prime Creator using the Powerful Energy of the SOURCE to create the material Galaxy. Mother/Father God currently reside inside the interior hollowed space of the Earth called Hollow Earth.

The Prime Creator is the sole person who can direct and control the various energetic channels of the Source energy, the main energy that powers the entire universe. He alone can turn it on or off. He can hasten or slow down the movement and rotation of planets and stars in any Galaxies in the Great Cosmos. He can even stop or freeze the Sun if He wants to. He can turn a day into a night or a night into day. He is the ONE who directs the flow of various etheric energies from every central sun of every star systems. He can even slow down time or make it faster.

The Prime Creator made a classic demonstration of this capability last 2015. If you recall on that year; a lot of people around the world were noticing that as though TIME was moving very fast. I remember so well on that year I was in Riyadh, Saudi Arabia for a short contract work. People on the internet claiming they feel like time was moving fast. I went out of office at 5:30 PM and then went to my accommodation, changed my clothes and went out to get some groceries. What was very puzzling to me was that when I got home from the Supermarket and looked at my watch it was already 11:20 PM. How in the world could time moved so fast when the supermarket was only 15 minutes away? And then we read some revelations during those days from some channelers that the Spiritual Hierarchy was making the time move much faster.

The Prime Creator is the father of Yeshua Ben Joseph the one we called as Jesus. His real name prior to incarnation was Sananda. It was the Prime Creator to whom he talked, prayed and commune with when he needed some counsel and direction. Needless to say that the Prime Creator is indeed the God of Love. and Jesus was sent here on Earth to teach the ways of love.

The Prime Creator is the leading person during the restoration and replenishment of the Earth after the devastating war between Atlantis and Lemuria. As mentioned in the book of Genesis; He was the ONE who said the words: "Let there be Light". Only the Prime Creator can access the Infinite Force of Energy of the Source. Just by saying a word or a series of words can trigger the dynamic flow of energy from the Source.

Just by saying a Word, the material world will conform to his voice. As the Earth was laid in ruins and dark clouds in combination of dust, debris, smoke and powdered materials that came from exploded mountains and cities made the Earths atmosphere not conducive to sustain life of living things. And so, the Prime Creator was called into the Earth scene in order to re-establish ecological order and harmony. He and along with all the members of the Spiritual Hierarchies, Company of Heaven and the members of the Galactic Federation was present on Earth to restore the Earth and its inhabitants back to the way it used to be prior to the war between Atlantis and Lemuria.

The Garden of Eden by the way is inside the Earth in Hollow Earth. There is a city there that is called Eden. On that garden it was the Prime Creator who issued the words that humans should only eat fruits and vegetables including nuts and seeds. In contrast to what Yahweh did when he literally asked people to kill animals for food. In Galactic terms, killing animals is considered violence and aggression against fellow beings. And that is why they tried to kill Jesus because Jesus does not want to obey the customs and commandments of Yahweh, that includes killing and eating animals; for Jesus was a vegetarian since birth. And Jesus does not want to worship Yahweh.

Going back to the subject of Eden. And that was the venue when they decided to start replenishing the world with a new set or new batch of creatures, animals, plants & trees including humans as most of the former living things before the war were wiped out. In fact, the dinosaurs survived the war as well as the global flood when they were brought inside the Hollow Earth. And so the assumption that the dinosaurs became extinct a few million years ago cannot possibly be true. Because the truth is they were rescued from the thermo nuclear bombs that were unleashed by the Evil Alliance namely: Atlantians, Annunakis, and Reptilians from Orion. These three groups are not members of the Galactic Federation of Light. They were the invaders and conquerors of the Earth.  And these group do not conform to the ways of love and light which is why they cannot possibly become members of the Galactic Federation of Planets and of Light. Yahweh was coming from the Annunaki group who settled in Sumeria in southern Iraq.

Despite of the fact that the Prime Creator has the leading advantage in some respects amongst all Gods and Goddesses, He absolutely does not ask nor require that anyone in any part of the Universe to WORSHIP and SERVE Him. He is absolutely NOT the kind of person who will take advantage of others just for the sole purpose of praising Him in reverence of adoration. None of that crap that we were told in various religions can be attributed to Him. For He will NEVER ask you to bow down in servitude and submission to Him. Instead, the Prime Creator will wrap his loving arms around you and treat you as part of his family.

He will NEVER treat anyone as His PRIVATE Property and to serve as slaves. Only the deceiver Yahweh will do such a thing. For Yahweh and the Prime Creator are not the same person. As mentioned already, the Prime Creator is the Father of Jesus. On the other hand, Jesus calls Yahweh as the liar and murderer from the very beginning (John 8:44-45).

For the record, the group of people that have met and have some dialogue with President Eisenhower and President Kennedy are all from the Galactic Federation. Ashtar Command which is the military arm of the Galactics are the ones who made the sudden broadcast of their presence via the British Television airwaves back in the late 1970s. And they will do this again.

During the Disclosure, after the announcement of the NESARA Republic; then the Prime Creator will be one of the person that will appear on the screen of our television, computers, ipads and smartphones during the broadcast. The Prime Creator along with Zorra (Father God), the Galactics, Ashtar, Sananda (Jesus), St. Germain will be the main characters that will appear to inform us about the transition of our Earth into the New Galactic Aquarian Age of Abundance, Peace, Harmony and Prosperity. As the old former ways of the world is over and done. This means that the Alliance of Annunakis and Reptilians have been defeated. It will also signal the graduation of those people who came here for spiritual development and spiritual evolution.