What was Happening Inside the Bermuda Triangle?

I think it is time now for me to answer the question and or the mystery about the so called Bermuda Triangle.  There's a lot of talk about what the Bermuda Triangle is and the mysterious disappearance of various ships, boats and airplanes that entered the area of space in the Caribbean and the Atlantic Ocean famously known as the Bermuda Triangle.  What really happened to them?  Where did they go?  Is it a portal to another dimension?

The Bermuda Triangle is one of the great EVIDENCE for the Hollow Earth.  The Earth that we live in is hollow inside.  Meaning, there's a civilization that exist and reside there for thousands and thousands of years and is a lot older than the civilizations we have here on the surface of the world. And they are very very advanced technologically.

Since we have a hollow earth therefore they have to have an entry point and exit point in addition to the two polar entry points in the North and South Pole.  And this is where the Bermuda Triangle comes into play.  The people of Hollow Earth built the entry point right at the middle of the Earth near the Equator to allow the entry and exit of their ships so that they do not have to rely too much on the two polar entry points.  Just like the ships that came in and out of Mt. Shasta are all cloaked the same thing with the ships from Hollow Earth they chose to cloaked their ships while they either leave/exit or enter the Earth.

The thickness of the solid crust of the Earth is about 800 miles. They made a hole in that area of the so called Bermuda Triangle to be used as a Gateway.  But it is not open all the time, it only opens when they have either an incoming or inbound ship and or they need to exit the Earth right at the equator instead of the Polar Extremities.

What Happened to the Ships and Airplanes who passes by the airspace of the Triangle?

When they open the Gateway this is when the zapping of various ships and airplanes take place.  Now zapping means the airplanes and ships, boats that happens to be within the vicinity of the triangle when the gateway opens does not mean they vanished and disappeared for good.  No, they did not disappear and never to return again.  They were just zapped instantly or teleported inside the gateway while the gateway on the triangle area were operating.  The opening of the Crustal Gateway creates the etheric force that brings and carry the ships or whatever happens to be are inside the vicinity of the triangle to the inside of Hollow Earth. 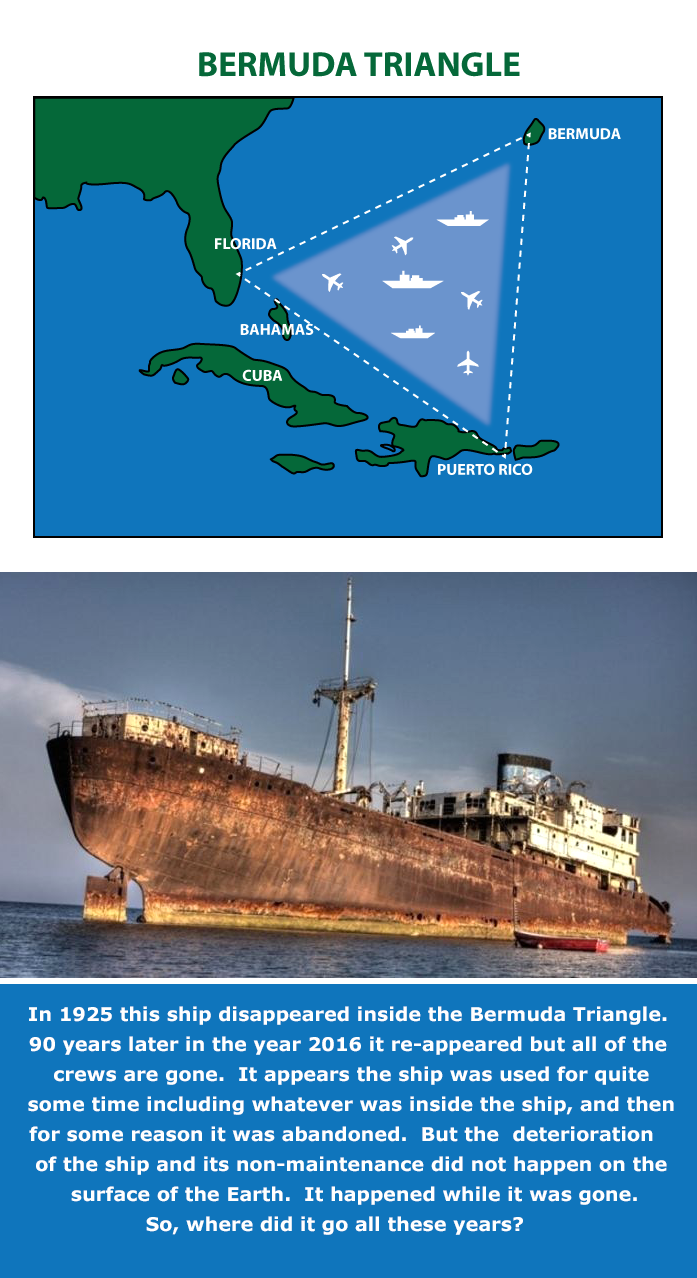 One example of this is the ship that disappeared in the year 1925.  At the time when the gateway was opened and activated this ship vanished from the surface of the world bringing with it the entire crew members of the ship.  For 90 years this ship mysteriously vanished from the world.  It cannot be seen on radar and neither the efforts to search for it when the orbiting satellites became available.  It really was missing on the surface of the world for all those years, 90 years to be exact.  Today when examining the ship it seems the crew of the ship was still using the things that were inside the ship and then after a while they stop staying inside the ship and ventured somewhere else.  Those 90 years that ship was never seen by any radars or satellites in space.  But it re-appeared in the year 2016.

By the look and inspection of the ship it was very obvious that the crew abandoned it.  And that it was unused for a very long time.  This can only mean that the entire crew of the ship after sometime eventually decided to leave the ship when they saw Hollow Earth was beautiful and a paradise on Earth.  They obviously did not come back and decided to stay inside Hollow Earth.  And then nine decades later the people of Hollow Earth decided to send the ship that went missing in 1925 back to the surface of the world so that the people here will realize that there is a world inside the Earth.  The fact that those people decided to stay for good means that the life there was heavenly compared to the life here on the surface world.

Now we know the mystery.  The missing ship was INSIDE the Earth for several decades.  It was there and was not disturb.  The ship was teleported inside the Hollow Earth while the Inner Earth Gateway of the Bermuda Triangle was open.

The Art and Technology of Teleportation was also used relatively on the same area near the Bermuda Triangle when the Space Shuttle Challenger was launched into space at Cape Canaveral Florida.  We thought those crew of the Challenger are gone.  But there was something we did not noticed that happened on that very day.  Some of the video right before the Challenger exploded in the air there was a beam of Light that appeared coming from the Bermuda Triangle.  It was captured by some of the footages about this beam of light emitted from the ocean and or the Caribbean area.  This was as mentioned by the people of Hollow Earth was when they intervened to save the lives of those space shuttle challenger crew as they knew what will happen to them and they acted immediately.  The beam of light was a teleportation beam which they released in order to transport the Challenger Crew from the inside the Shuttle into the domain of the Hollow Earth right before the shuttle exploded in the air. 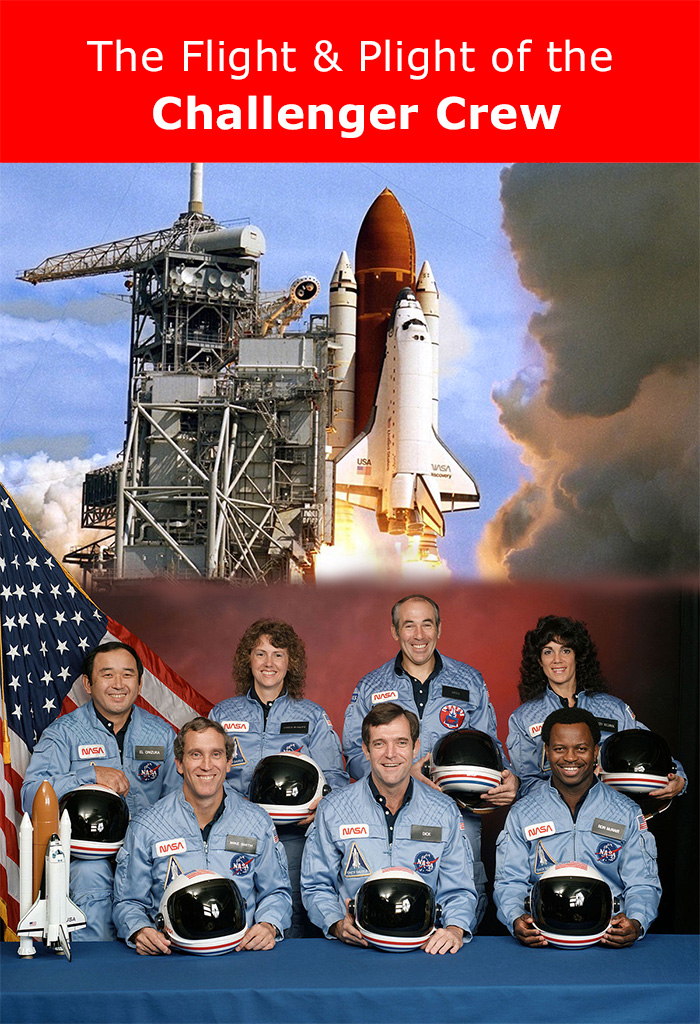 This means today, all the crew of the Space Shuttle are all alive and well inside the Earth.  Yes, you can check the videos, footages of the Challenger and you will find a beam of Light was released that hit the shuttle to save the crew of the Challenger.  Someday they will visit the surface of the world and give testimony of the reality of the Hollow and Inner Earth world. 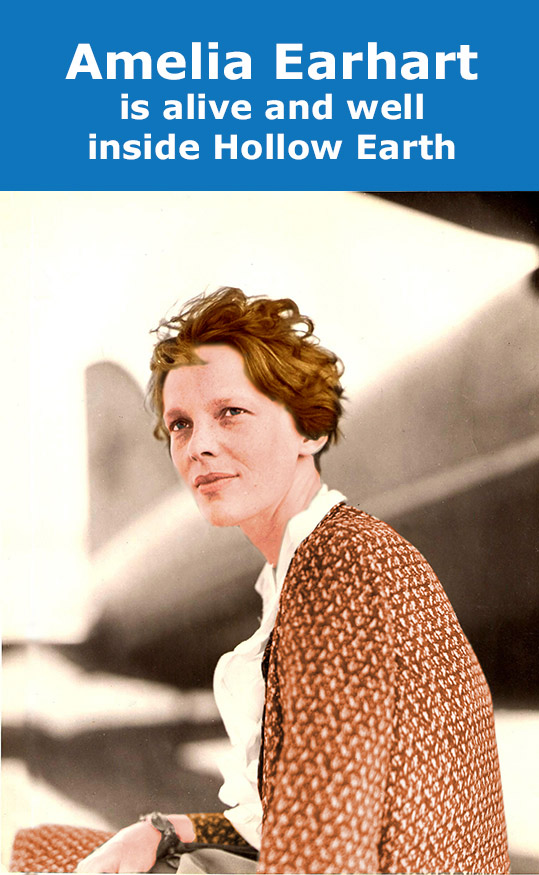 The Same thing that happened with Amelia Earhart.  Today, no one can find the airplane of Amelia.  She and her airplane vanished decades ago.  But thanks to the people of Hollow Earth she too was saved by the Agarthans when seconds before her plane hits the ocean they also teleported her inside the Earth.  And this means Amelia Earhart is living happily inside the world of Hollow Earth.  We on the surface thought she died but she is actually alive and well in hollow earth.  She is already much taller than what she used to be before she disappeared.  This is because the gravity inside the Earth is much lower and therefore it is optimal for the growth of the human bones. And she never grows old; as no one grows old in Hollow Earth. Their technologies and their environment makes it possible for people to stay young and never die.  But they have the option of replacing their bodies with something else if they want to.

I still have a lot of people I can share who made it inside Hollow Earth but I think it is better to mention those that are well known because there is a lot of people there from the surface who are just ordinary people like you and me who stumble inside a cave and was assisted to enter the Inner and Hollow Earth via tunnels with fast moving shuttles underneath the surface of the world.

Another set of people that went missing that people can relate to is the Lost Ten Tribes of Israel.  Just like them they have been missing for a very long time.  Do you remember Jesus (Yeshua) was also missing for more than a decade and then re-appeared when he was already 30 years old?  It turns out Jesus was transported via the High Speed Shuttles of the Agarthians of the inner Earth.  Jesus (Yeshua) used this facility to travel the world.  And in the same way, the Lost Tribes of Israel went inside the Earth and was accepted INSIDE Hollow Earth in which is where they have been since they were missing on the surface world.  Underneath Israel there is a passageway into the Inner Earth.  And that is what they used to go to Inner Earth and then Hollow Earth.  And this is why some of the people are saying that there are people in Hollow Earth who can speak Aramaic and Hebrew and that is because they are part of the Tribes of Israel who went missing but is now found inside the Hollow Earth.