Note: JFK Sr. is still one of the most respectable US President the world has ever known.  His bravery in confronting the Deep state Cabal at the time was a shining example for most Patriotic Americans.
________ 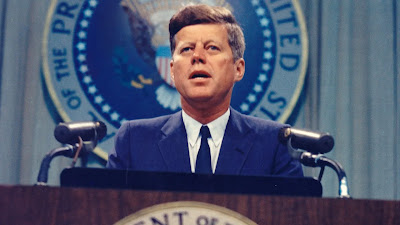 I have been anxiously waiting to speak with all of you beautiful patriots! I would just like to say right now that I have been watching what has been occurring in your world, and most especially in your United States lately…and most importantly with the so-called, QAnon, movement.

As many of you read in my last message that I provided to my muse here, I ended it by saying “Where We Go One, We Go All”…and yes, I was first and foremost indicating my approval of the movement itself, and I was lending my support to it…but it was a bit more than even that. It was, as some of you have heard through the grapevine in your alternative media, that I was the originator of the Q group. I will say, here and now, that is correct, but it wasn’t necessarily called the Q Group at that time.

The Q moniker has been given to it recently. I did, in fact, believe that my life on Earth was in danger many years ago…and I wanted to ensure that [regarding] the very important areas of deceit that I had discovered were being planned by your Deep State (even way back then), steps would be continuously taken to combat their sordid actions.

Yes, I am speaking of the Federal Reserve Board, which I was due to soon terminate, until the event of my death occurred. I was also going to re-introduce the gold standard, and I had knowledge of extraterrestrial happenings which I believed needed to be disclosed.

So, there were several actions being taken by the other side, for which I was trying to prepare this soon-to-be Q group, to continue the fight against those actions they were desperately trying to complete.

I may have begun the group which is now being called Q Anon, but it has evolved into an even more powerful group of members now and I am very proud of all those involved in it, and for taking the helm on this very important movement against the Deep State.

I sometimes envy all of you who are physically there at this time because even though there are many tragic things happening, there are also exciting things happening. Even just watching the QAnon movement turn the tables on these powerful social media outlets is very exciting! That is very satisfying for me to see.

Still, even though I would love to be there with you, linking arms and moving forward into a new world, I understand everything that has happened in regard to my lifetime there and I am better able to provide a bit higher perspective regarding all the happenings on Earth at this time, from the vantage point that I have now.

So all works out in the way it is meant to, even though it can look terribly depressing and frustrating, and even maddening, at times. I felt that way myself many times while I was in the White House as President. While my intentions were good regarding areas where I was unable to completely fulfill the needs of different groups of people, and of even countries, in certain situations…I still deeply regret the unresolved status of those areas in which I left them.

In some small way, I feel that providing these messages at this time, during this very tumultuous time on Earth, is a bit of penance on my part…it is also my hope that these messages will be received with open hearts, open minds, and a willingness to take action.

My muse here has been very hesitant to put herself “out there,” so to speak, and that is one of the reasons I chose her to receive these messages, because it is part of her role in this lifetime to take more action…she is doing that now, and I am proud of her.

Each and every one of you has a specialty… an area of expertise, around which you can take action. You may not even know what that area is at this time, but if you become quiet for a few moments and listen, you will eventually hear that small still voice, indicating to you, where your passion lies…where your expertise lies.

Your expertise is needed very much, right now. It is paramount that each voice be heard at this time…each soul is needed to add your individual commitments to the “whole” of this movement. All of you souls brought together in one very important group of kindred spirits have already, and will in the future, become unmatched by any other group in this moment of time … in our history.

You have great things to achieve and it won’t even take a large amount of time to accomplish because you all have already spent so much time preparing for this moment…individually and collectively.

When you come together as a powerful like-minded group such as you are, you are unstoppable! Those on the other side will find this out very quickly and very intensely…in fact, they are finding it out right now (smile).

Well, I just wanted to inspire you with a little cheerleading in this message for you all because I am so very proud of each and every one of you, and how you have not allowed the very deliberate and deceitful tactics being used by the mainstream media, as you call them, to try and undermine you and to compel you to quit…to quit trying…to quit living…to quit breathing, quite truthfully.

I do not mean to be too dramatic but that was a part of their plan for all of you. So you are showing them without a doubt, that you will not go down without a fight, and you will fight to the bitter end…and I will tell you now, that it will ultimately be a very happy ending, in God’s timing…I promise you that…it will take work on all of our parts, however, I am always here with you in spirit, assisting you in any way I can, and loving each one of you, with all of my heart.

Where We Go One, We Go All.